THIS ARCHBISHOP SHOULD BE POPE ONE DAY! HE TELLS IT LIKE IT IS ESPECIALLY ABOUT THE GERMAN BISHOPS

I took this photo when I was on sabbatical in Rome in 2013: 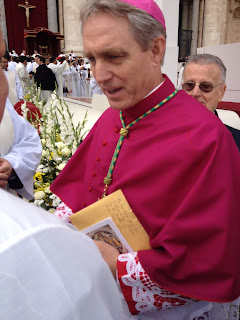 Archbishop Georg Gänswein tells it like it is. I think he might make a great pope one day. Who knows. But what he says about the German bishops and their money hungry ways is true. Germany's hierarchy is truly corrupt or at least those that Archbishop Georg Gänswein accuses. But they get a pass, but don't suggest Mass ad orientem by the beginning of Advent or there will be swift action!

VATICAN CITY, July 19, 2016 (LifeSiteNews) — Archbishop Georg Gänswein, Pope Emeritus Benedict XVI's long-time personal secretary, has given a sweeping interview in which he accuses his fellow German bishops of downplaying Catholic dogma, and insists that popes cannot change the Church's with "half sentences or somewhat ambiguous footnotes."
Gänswein, who also serves as Prefect for the Papal Household for Pope Francis, made his remarks in an interview published Monday in the Ravensburg newspaper Schwäbischen Zeitung.

“Considering the baselines of their theological convictions, there is definitely a continuity” between Benedict and Francis, Gänswein said, according to a Catholic News Agency translation.

“Obviously, I am also aware that occasionally doubt might be cast on this, given the differences in representation and expression” between the two men, he added.

“But when a pope wants to change an aspect of the doctrine, then he has to do so clearly, so as to make it binding,” noted the 59-year-old archbishop, a canon lawyer who formerly worked in the Congregation for the Doctrine of the Faith.

“Important magisterial tenets cannot be changed by half sentences or somewhat ambiguous footnotes,” he said, in an apparent reference to the controversy over Amoris Laetitia.

Gänswein conceded that Pope Francis has “a way of speaking that can at times be somewhat imprecise, indeed flippant,” and noted that “statements that can be interpreted in different ways are a risky thing.”

But even if his statements “lead to bizarre interpretations,” Pope Francis is not likely to change, Gänswein said. “Every pope has their own personal style.”

In the interview, he also strongly criticizes the German hierarchy for “effectively excommunicating” Catholics who opt out of the state-mandated church tax while remaining unconcerned that members of their flock question the Church’s dogmas.

The German bishops’ expectation that the “Francis effect” would lead Catholics back to Church “appears to have not transpired.”

In fact, statistics released July 15 show the Catholic Church in Germany in steep decline, with 181,925 Catholics recorded as leaving in 2015, and fewer than 10,000 returning or joining. Despite about 167,000 infants baptized, the church had a net loss, according to Catholic News Service.

Gänswein, the eldest son of a blacksmith from the village of Wald in the Black Forest region, blasted the German bishops for regarding payment of the state Church tax as the basis for membership in the Catholic Church.

When a German registers as a member of a particular church — Catholic, Protestant, Jewish — the government collects the tax, which amounts to about eight percent to nine percent of an individual’s total income tax, or three to four percent of his salary, and distributes this to the religious community.

The Church receives about 70 percent of its income from the Church tax, and with revenues of $6.71 billion in 2013, it has become “one of the wealthiest entities, faith-based or otherwise, in the world,” according to a 2015 analysis by the National Catholic Register’s Edward Pentin.

Anyone who wants to opt out of the church tax “must declare his departure from the church to which he belongs, whether Catholic or Protestant, by a public act made before a competent civil authority,” explains Vatican watcher Sandro Magister. Many Germans unregister to avoid the tax but continue to attend Mass and pay private tithes.

Despite the declining number of members, the Catholic Church received an estimated income of 6.64 billion USD in 2015 because of Germany’s robust economy.

Gänswein echoed concerns Pope Benedict has repeatedly voiced when he agreed with interviewer Hendrik Groth that Catholics who opt out of paying the tax are “effectively excommunicated.”

“Yes, that is a serious problem,” the archbishop responded. “How does the Catholic Church in Germany react to someone leaving? By automatic expulsion from the community, in other words, excommunication! That is excessive, quite incomprehensible.”

Added Gänswein: “You can question dogma, no one is concerned about that, no one gets kicked out. Is the non-payment of the Church tax a bigger offense against the faith than violations of the tenets of faith?”

He said the impression that this system creates “is this: As long as the Faith is on the line, that is quite acceptable. However, when money enters the equation, things get serious.”

Gänswein said he doesn’t have “any ambition” to be appointed to a German diocese in the future, and it would be unlikely in any case, given that the diocesan cathedral chapters are instrumental in making episcopal appointments in Germany, and they are not known for having the “highest loyalty toward Rome.”

Moreover, Gänswein said as far as the Catholic Church in Germany is concerned, his past work with the CDF and current position as Pope Benedict’s personal secretary would likely be regarded as “the mark of Cain.”
Posted by Fr. Allan J. McDonald at Wednesday, July 20, 2016

The funding of churches via taxation is the kiss of death. This is how all the modern secular nation states reined in Catholicism: first they stole Church property (farms and real estate that provided rent income) and then they put the bishops on a leash with direct payments from the state treasury.

But we the people constitute the nation from which any government is drawn and we the people are the ones who collectively form the Church and its personnel. Why we the people would cede and surrender our very livelihood to a small cabal of fellow citizens called "the state" or surrender our economic liberty supporting our missionary activity to the same small group is beyond stupid.

THINK people! The anti-Christian revolutionaries have sought for 250 years to divorce "the people" from the Church. They've sought (and been largely successful) to strip the schools, orphanages, hospitals, clinics, and retirement homes from private Catholic citizens or private religious congregations and along with it, strip these people so served from their allegiance and reliance on the Church and shift every allegiance and alliance to their secular anti-Church.

We glibly get excited by "Obamacare" and "social security" and cheer even more government spending on "the poor" oblivious to two little details: 1, all this spending is done via debt ($19 trillion and growing) and 2. this spending buys off their allegiance to the secular state (and away from family, locals, church, and personal initiative).

The secularists use our tax dollars and naïve trust against us. People look to government as though it's a god and as though its personnel are above reproach. As though a badge makes a man trustworthy with a gun and a .gov email makes someone above corruption and shenanigans. We've been sold for 40 years on the notion that big enterprise is corrupt and big church is corrupt so the only savior will come from Big state/big party.

Wow, Jusad, it could not have been said better. Amen!

Justadbellum, great comments, I have absolutely nothing to add

The German bishops on the whole are a group of liberal losers. No sentient individual should pay them the least attention. And they're racist too!!