POST TRAUMATIC RAT STRESS SYNDROME REARS ITS UGLEY HEAD FOR ME WITH THIS STORY FROM AN ATLANTA ELEMENTARY SCHOOL!

This is only one rat, the size of a rabbit, that was killed in my rectory in September of 2010, the place that is my home and office and this one is only one of about 8 or more that we killed there! The story below comes out of Atlanta today and renews my post-traumatic rat STRESS syndrome with which I still suffer. I see rats and hear them when as people assure me, they aren't really there any more! Or are they? I almost put a sign outside the rectory saying: "RATS R US!" 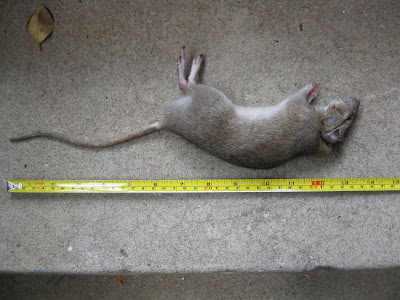 ATLANTA — Authorities say an Atlanta elementary school has become infested with giant rats, prompting the principal to send a letter to parents alerting them of the situation.

Thomasville Heights Elementary Principal Charles Penn said the rodents have been a persistent problem, and the school system has hired an exterminator.

Teachers told WSB-TV that rats have left a foul smell in many of the classrooms, and that teachers have used yardsticks to bat them away in the middle of the school day.

Parent Sherrilyn Cullins said the rats are all over the school. Her daughter describes them as being the size of rabbits.
Posted by Fr. Allan J. McDonald at Friday, November 11, 2011