YIKES! PRAY FOR KANSAS CITY! WOULD POST-CATHOLICS IN THE CHURCH EVER GET POLITICAL AND MEAN-SPIRITED TO ACCOMPLISH THEIR GOALS? POSSIBLY!

"There is no forbearance or forgiveness for this man who pled no contest to a politically motivated charge filed by an ambitious prosecutor with strong ties to the abortion industry, so that he might save his local church the pain and cost of a public trial. The statute used was not even applicable to what happened, but such is our legal and political society."

In his letter,Father Gregory Lockwood, who also serves as secretary for seminarians in the diocesan vocations office, attributed Finn's resignation to "a long, bitter, nasty campaign by many of our brothers and sisters, who, for whatever reason, were convinced that he needed to go." He said the push for Finn's departure had less to do with the Ratigan affair and more so with Finn rejecting "their view of church reality" largely tied to Vatican II ideas.

"If this had happened on another, more popular bishop's watch, the aftermath we have seen would not have occurred, because the motivation for the mob-scene that ensued was Bishop Finn's fidelity to a classical concept of the church, not the cover-up of any misconduct," he wrote.

"No one has won anything here; we've all lost. An honorable man has been unjustly disgraced, and we have sacrificed his dignity and our own in a rush to punish and destroy, things antithetical to everything our common faith represents," Fr. Lockwood said. 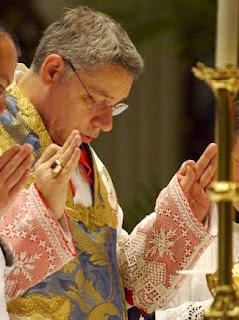 You can read the whole un-Christian brouhaha by the Kansas City Star (secular newspaper) by pressing this sentence.

I suspect that the priest who wrote the initial scathing letter is a friend of Bishop Finn, that he might well be expressing the insights of his friend in this letter, but who knows?

Then you can read the National Chismatic Reporter (NCR) take on this whole thing by pressing this sentence. Certainly they wouldn't have a bias, would they?

By the way, The National Chismatic Reporter (NCR) is head quartered in Kansas City. So no conflict of interest there!

No matter how you cut it, it's a mess! I can see Catholics becoming quite disillusioned by this, especially those rank and file Catholics who don't want to know the ugly politics of the Church and simply want guidance and nourishment from the Church to live their lives with meaning and purpose in this vale of tears.

How many Catholics will be alienated by the many faceted aspects of ugliness going on here and the so-called liberals or progressives (post-Catholics) who are precisely post-Catholic and want to drag the true Church with them into apostasy?
Posted by Fr. Allan J. McDonald at Thursday, May 07, 2015

Father, while I find that what radical traditionalists do most of the time online, smearing and calumny-ing various people, acts only in aiding the devil, this might be a rare occasion of necessity to use social media and blogs with allies to expose the truth of this vocations director and his affiliations in public to silence his calumnies.

It's my understanding that Finn did not know that Rat was a pedophile, but he did have reason to suspect that he was. Therefore, Finn did make a colossal mistake, and in this day and age he should have know better.

But there are so many people who have suspected child molestation but didn't say anything because they just weren't sure. And then there are cases of decent people being falsely accused of molestation based on marginal evidence. If the wife of a molester can't be sure, and if a neighbor can make a mistaken judgement, then it's hard to hold some distant administrative figure criminally responsible for not knowing what to do.

It is painfully clear to anyone whose head is not buried in the sand that the resignation of Bishop Finn was forced by the Obama administration as part of the Jade Helm exercises planned in response to a potential citizen uprising in the southwestern United States.

There. I said it and I'm glad.

Is it possible (1) that there are angry, dissenting people in the Kansas City diocese that have unfairly targeted Bishop Finn over a long period of time and in a spiteful way for his orthodoxy, AND (2) that Bishop Finn did not respond swiftly and properly to the Ratigan situation?

No matter what else was going on in the Kansas City diocese, I don't think it unreasonable to expect that we make the protection of children a top priority. The benefit of the doubt must go to the protection of children. There must be serious consequences when children's protection is not the first reaction from those in authority when charges concerning child safety and protection first surface. Even if the Bishop is orthodox.

Bishop Finn pleaded guilty, like thousands of criminals do everyday, and when you do that, you forfeit any right to say, "Yeah, but."

It seems like it is the Rev. Lockwood who is trying to muddy the waters by dragging in politics, church politics, abortion, etc., none of which have anything to do with the case.

Having admitted guilt, former Bishop Finn should accept responsibility, make amends and ask the Rev. Lockwood to stand down.

Obama's invasion of Texas -- another unfortunate byproduct of Vatican II!